Trail Ridge Road Closes To Through Travel For The Season

Trail Ridge Road in Rocky Mountain National Park officially closed for the season to through travel yesterday. The most popular destinations for this time of year including Bear Lake Road, Moraine Park, Horseshoe Park and the section of Trail Ridge Road along the Kawuneeche Valley are all open. Plus the Endovalley Road has recently reopened after last year's flood damage. These are all great areas for hiking and wildlife watching. 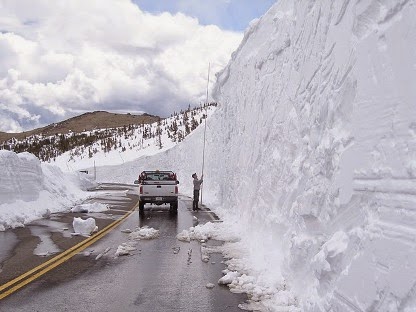 Trail Ridge Road, one of the most impressive alpine highways in the United States, is the highest continuous paved road in America and reaches an elevation of 12,183 feet. The road connects the park's communities of Estes Park on the east and Grand Lake on the west. Trail Ridge Road is not designed to be an all season road with 11 miles above 11,500 feet and few guard rails and no shoulder. There are winter conditions of drifting snow, high winds and below freezing temperatures above 10,000 feet. The road is currently closed at Colorado River Trailhead on the west side and Many Parks Curve on the east side.

According to park superintendent Vaughn Baker, "At high elevations we continue to receive high winds and freezing temperatures. The snow continues to blow and drift on Trail Ridge Road, making snow clearing operations and driving conditions extremely hazardous. During the winter season, weather permitting, we will keep Trail Ridge Road open to Many Parks Curve on the east side of the park and to the Colorado River Trailhead on the west side of the park."

Trail Ridge Road is now in "winter trail status" which means that bicycles and pets are not permitted beyond the closed gates. For current road conditions and other park information, please call the park's Information Office at (970) 586-1206.