A Colorado Parks and Wildlife investigation into an alleged bear attack at Golden Gate Canyon State Park on Sept. 19 resulted in a citation of a Gilpin County woman for false reporting to authorities. Julie Bosworth, 38, plead guilty Tuesday to the class III misdemeanor and was sentenced by Gilpin County Judge David Taylor to 20 hours of community service.

“As an agency we investigate these to the fullest and we cannot and will not tolerate false reporting,” said CPW Northeast Region Manager Mark Leslie. “If you do this, we are going to charge you.” 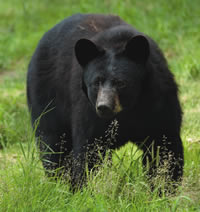 The citation was issued Oct. 9 after the investigation and DNA testing - her clothing was sent to a Wyoming lab where the only DNA discovered was that from human and dog hairs - proved the injuries Bosworth sustained were not from a bear.

"CPW staff works diligently with our partner agencies to promote and enhance visitor safety throughout the state,” said Golden Gate Canyon State Park Manager Todd Farrow. “False reports such as these are a hindrance to our already limited staff and resources as our time and efforts can be better utilized. In addition, it can also affect how the public views the already delicate balance between human and wildlife encounters."

Deputies with the Gilpin County Sheriff’s Office responded Sept. 19 at 1:20 p.m. to the Coyote Trail in Golden Gate Canyon State Park following a 911 call from Bosworth reporting she had been attacked by a bear. Emergency services personnel transported her to Saint Anthony Medical Center in Lakewood at 1:40 p.m. for treatment to injuries on her arms, legs and head.

Park rangers and wildlife officers had also responded to the scene and conducted a two-acre search surrounding the Coyote Trail, finding no evidence of wildlife active in the area. Following the investigation at the scene and subsequent interview of the woman, CPW officials determined at that time that no bear attack occurred.

The later DNA testing was sent in for confirmation to support the findings of the incident that day.