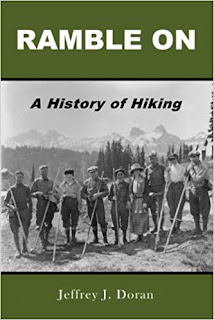 Kurt Repanshek from the National Parks Traveler recently took the time to review my new book, Ramble On: A History of Hiking, which he published on his website yesterday. In case you're unaware, the National Parks Traveler is the leading, editorially independent, nonprofit media organization dedicated to covering national parks and other protected areas. The website is focused on informing the public of environmental, scientific, and other newsworthy developments surrounding, involving, and affecting national parks, other protected areas and their governing bodies.

Up front, Kurt stated it pretty bluntly that: "Hiking might seem rather bland as a topic to build a book around, but just as Terence Young did in 2017 with Heading Out: A History of American Camping, Doran's research brings to light some surprising hiking trivia." He continued later, stating,: "But Ramble On is more than a book of hiking trivia, though it is chock-full of that. Rather, it can be viewed as a vehicle for taking measure of where hiking got its start, why we hike, and what the future of the activity might look like as we crowd the outdoors."