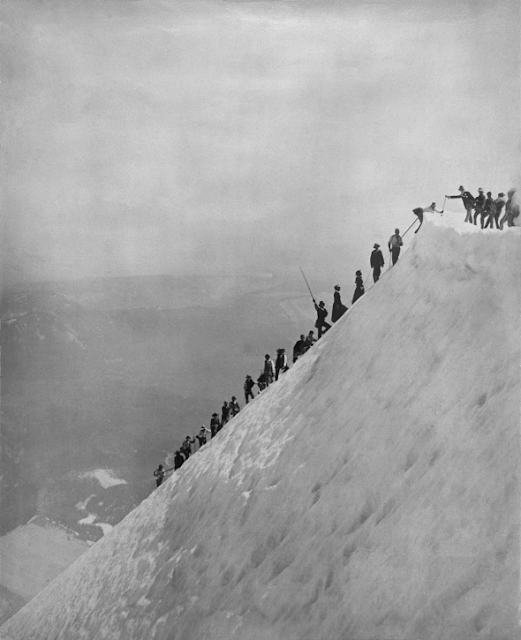 One of the first hiking clubs in the Pacific Northwest held their inaugural meeting in one of the most extreme locations imaginable. On June 12, 1894 organizers for the newly proposed Mazamas club published an advertisement in the classifieds of the Morning Oregonian announcing that a meeting would take place during the following month atop Mt. Hood - the highest peak in Oregon. The ad proclaimed that the meeting would include a “typical mountain banquet.” It was also made clear that any prospective hiker who wished to become a charter member of this new group was required to attend this organizing meeting. On July 17th more than 300 people responded to the advertisement by arriving at one of two designated spots along the flanks of the 11,249-foot mountain. Two days later a total of 193 climbers reached the summit, of which 105 would become charter members. Before descending from the peak the new organization released three homing pigeons that announced to friends in Portland that the club had been successfully established. The Mazamas, like many of the first hiking clubs, had some bizarre and highly stringent criteria for joining. Many of those same clubs also had some very quirky traditions, many of which are detailed in my new book, Ramble On: A History of Hiking, now available on Amazon: https://www.amazon.com/dp/1725036266/