Last October, the NPS proposed a plan to adopt seasonal pricing at Rocky Mountain National Park and 16 other national parks to raise additional revenue for infrastructure and maintenance needs. The fee structure announced today addresses many concerns and ideas provided by the public on how best to address fee revenue for parks.

Revenue from entrance fees remains in the National Park Service and helps ensure a quality experience for all who visit. In Rocky Mountain National Park, 80 percent of entrance fees stay in the park and are devoted to spending that supports the visitor. The other 20 percent of entry fee income is shared with other national parks for their projects.

According to park superintendent Darla Sidles, “We appreciate all park stakeholders who engaged and commented on the proposed fee increase including elected officials, community leaders, park visitors and our neighbors. We are committed to keeping Rocky Mountain National Park affordable and providing visitors with the best possible experience. This fee increase is still an incredible value when considering other family and recreational experiences. Plus, 80 percent of those funds stay right here in Rocky to benefit visitors and improve the park, such as operating the park’s visitor shuttle bus system, providing food storage lockers at campgrounds, and restoring willow and aspen habitat. The additional revenue will also help us address the park’s $84 million deferred maintenance backlog on projects such as rehabilitating numerous trails like the Onahu Trail and Cub Lake Trail, renovating restroom facilities, replacing a failing septic system at Timber Creek Campground, and mitigating beetle-killed hazard trees in or near park facilities such as picnic areas and trailheads.”

Entrance fees collected by the National Park Service totaled $199.9 million in Fiscal Year 2016. The NPS estimates that once fully implemented, the new fee structure will increase annual entrance fee revenue by about $60 million.

The price of the annual America the Beautiful National Parks and Federal Recreational Lands Annual Pass and Lifetime Senior Pass will remain $80.

As part of its ongoing efforts to address aging park infrastructure and improve the visitor experience, the National Park Service (NPS) announced today changes to the entrance fees charged at national parks. The changes, which come in response to public comments on a fee proposal released in October 2017, will modestly increase entrance fees to raise additional revenue to address the $11.6 billion in deferred maintenance across the system of 417 parks, historic and cultural sites, and monuments.

Most seven-day vehicle passes to enter national parks will be increased by $5 and will be implemented in many parks beginning June 1, 2018. Yosemite National Park for example will increase the price of a seven-day vehicle pass to the park from $30 to $35. More than two-thirds of national parks will remain free to enter. A complete list of park entrance fees may be found here. 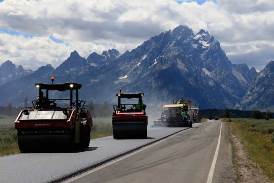 All of the revenue from the fee increases will remain in the National Park Service with at least 80 percent of the money staying in the park where it is collected. The funds will be used for projects and activities to improve the experience for visitors who continue to visit parks at unprecedented levels. Increased attendance at parks, 1.5 billion visits in the last five years, means aging park facilities incurring further wear and tear.

“An investment in our parks is an investment in America,” said U.S. Secretary of the Interior Ryan Zinke. “Every dollar spent to rebuild our parks will help bolster the gateway communities that rely on park visitation for economic vitality. I want to thank the American people who made their voices heard through the public comment process on the original fee proposal. Your input has helped us develop a balanced plan that focuses on modest increases at the 117 fee-charging parks as opposed to larger increases proposed for 17 highly-visited national parks. The $11.6 billion maintenance backlog isn’t going to be solved overnight and will require a multi-tiered approach as we work to provide badly needed revenue to repair infrastructure. This is just one of the ways we are carrying out our commitment to ensure that national parks remain world class destinations that provide an excellent value for families from all income levels.”

The price of the annual America the Beautiful National Parks and Federal Recreational Lands Annual Pass and Lifetime Senior Pass will remain $80.

“Repairing infrastructure is also about access for all Americans,” Secretary Zinke said. “Not all visitors to our parks have the ability to hike with a 30-pound pack and camp in the wilderness miles away from utilities. In order for families with young kids, elderly grandparents, or persons with disabilities to enjoy the parks, we need to rebuild basic infrastructure like roads, trails, lodges, restrooms and visitors centers.”

Fees to enter national parks predate the establishment of the National Park Service in 1916. For example, Mount Rainier National Park began charging an entrance fee in 1908. Factoring in inflation, the $5 entrance fee the park charged in 1914 would be the equivalent of a $123 entrance fee today—more than four times the price of the new seven-day $30 vehicle pass.

Entrance fees collected by the National Park Service totaled $199 million in Fiscal Year 2016. The NPS estimates that once fully implemented, the new fee structure will increase annual entrance fee revenue by about $60 million.

In addition to implementing modest fee increases and enhancing public-private partnerships aimed at rebuilding national parks, Secretary Zinke is working closely with Congress on proposed bipartisan legislation to use revenue derived from energy produced on federal lands and waters to establish a special fund within the Treasury specifically for “National Park Restoration”. The billfollows the blueprint outlined in Secretary Zinke and President Trump's budget proposal, the Public Lands Infrastructure Fund.

The National Park Service has a standardized entrance fee structure, composed of four groups based on park size and type. Some parks not yet aligned with the other parks in their category will raise their fees incrementally and fully incorporate the new entrance fee schedule by January 1, 2020.

This year’s tax season ends on April 17, offering extra time for last-minute filers to submit their 2017 federal and state taxes and to make a tax-deductible contribution to help Colorado’s wildlife. Colorado Parks and Wildlife asks those who have not yet filed to consider helping threatened and endangered wildlife when finalizing your Colorado state returns with a voluntary contribution through the Non-game Conservation and Wildlife Restoration Cash Fund.

CPW is one of the organizations included on Colorado state income tax form 104A as part of Checkoff Colorado, which allows taxpayers to make voluntary contributions to the organizations of their choice when filing their state income tax returns. Specifying a contribution on line No. 1 of Colorado tax form 104CH (the Voluntary Contributions Schedule form) supports CPW programs that support wildlife rehabilitation and preservation of threatened and endangered species in the state of Colorado. Specified donations to the Non-game Conservation and Wildlife Restoration Cash Fund are tax-deductible and help support around 750 species of wildlife that cannot be hunted or fished.

“We have a bit of fun with our campaign theme that wildlife doesn’t have an annual income to support their livelihood,” said Dan Zimmerer, CPW’s partnership coordinator. “But the truth is, some species are simply more vulnerable than others. These check-off contributions help us fund CPW projects and help support our rehab partners. These partners truly appreciate your help in doing their very important wildlife work.”

Coloradans contributed more than $180,000 last year to help a variety of species through the tax checkoff, making the Non-game Conservation and Wildlife Restoration Cash Fund the number one fund out of over 20 options for Colorado residents. Some recent non-game success stories in Colorado include the reintroduction of the Canada lynx and natural breeding after translocation of the endangered boreal toad. Be a part of our next conservation story by checking off for wildlife on your 2017 Colorado state taxes.

To learn more about the various species that benefit from your voluntary contribution, please visit cpw.state.co.us.