Almost ten years ago I posted a blog that explored the question as to whether air horns are effective as bear deterrents. My thoughts were that the high-decibel noise coming from an air horn might be more effective than bear spray for three reasons:

3) Bears have much better hearing than humans, thus the noise would potentially bother them even more than humans 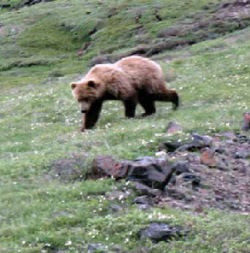 That posting has generated quite a bit of interest over the years - in fact, it's the most popular post on this blog of all time - generating almost 50,000 views. As a result, I decided to revisit the subject to see if there was anything new to report. Specifically, are there any new studies that provide hard evidence as to whether or not air horns actually work?

It seems that the idea of using air horns has actually gained some traction since the last time I visited this topic. However, I still couldn’t find any hard evidence on the effectiveness of them as a deterrent against black bears or grizzly bears.

Here’s what I did find:

In an “Ask A Bear” column (updated in 2017), Backpacker Magazine cited a test conducted on polar bears in the 1970s that found that "ultrasonic frequencies fine-tuned and blasted over large speakers repelled bears roughly 69% of the time from a testing perimeter that contained food. Of the testing pool of 74 bears, 51 were strongly repelled, but eight bears exhibited no response, and 15 polar bears actually chose to investigate the source of the sound." The article concluded that loud noise may act as a deterrent, but it can also act as an attractant. This conclusion is also essentially being communicated on several government websites, as we shall see further below.

The study cited by Backpacker was effectively the only research that I could find that was related to my question, but it really didn’t answer it. One, the test was conducted on polar bears, and two, air horns weren’t used in the test. I should point out that the column also states that bear guru Stephen Herrero believes that an ultrasonic bear repellent is worthy of further study and testing. There is one other study that I found that I should mention here. It was conducted by Gary D. Miller from the Zoology Department at the University of Montana. The study tested several potential bear repellents on 2 male grizzly bears and 2 female polar bears at the Churchill Bear Laboratory in Churchill, Manitoba. The study found that air horns did not repel either of the two bears tested. I have to take this result with a large grain of salt, however, given the extremely small sample size and the fact that the bears tested were not in the wild.

The Get Bear Smart Society, a Canadian organization that works to educate the general public as well as government agencies across North America, believes that air horns can be effective when used in conjunction with human dominance techniques to move a bear off (A guide to non-lethal management techniques). On their website they also state:


Noise deterrents work by making a loud, unpleasant sound that causes the bear to be uneasy and move away. Noise deterrents are advantageous if you are a long distance away from the bear. Furthermore, they cause neither harm nor injury to the bear when correctly used.

In some cases, noise deterrents do not work either because the bear has habituated to human noise or because it has no natural fear of the noise.

I found several governmental websites in the United States and Canada that offered similar advice. For example, the Kenai Fjords National Park website states that “It is a good idea to carry a non-lethal deterrent such as an air horn or pepper spray in case of a surprise encounter…”

As a result of the Marine Mammal Protection Act, the U.S. Fish and Wildlife Service published Deterrence Guidelines in the Federal Register, which states that:


These guidelines…are appropriate for safely and nonlethally deterring polar bears from damaging private and public property and endangering the public. The use of commercially available air horns and other similar devices designed to deter wild animals…may be effective in deterring bears while causing no lasting or permanent harm to individual animals.

The Kluane National Park and Reserve in northwestern Canada recommends bear spray as your best deterrent, but also mentions that "Other tools can help you deter a bear: noisemakers such as air horns" can be used as well.

The Alaska Department of Fish and Game links to information from several websites and brochures. This includes one from the Arctic National Wildlife Refuge which states that you should "Consider the range of actions you could take. Start with the least aggressive options, such as using noise makers, grouping together, yelling or clapping, or deploying air horns". Another links to a brochure from Park Canada that states that air horns may be effective in deterring a polar bear. Interestingly, the Fish and Game website also mentions using air horns as a defense against an aggressive wolf.

A brochure published by the British Columbia Forest Safety Council states that "Noises that cannot be reproduced in the wild, (e.g. a metallic noise), will let a bear know that you are approaching and give them advanced notice to move out of the area. However, noisemakers that startle a bear, such as an air horn, can provoke an attack. If you release an air horn too close to a bear hiding in the bush and it startles them, they may charge."

The Manitoba Wildlife and Fisheries Branch asserts that "When hiking, carry bear deterrent spray and also consider taking a walking stick and an air horn as further deterrents."


The two most effective bear deterrents are bear spray and noisemakers. Carry both when in bear country.

The most effective noisemaker in bear country is you. Talking or singing loudly can help prevent surprise encounters with wildlife. With enough warning of your approach, wildlife typically remove themselves and their young from the area.

When I see a bear, should I use a noisemaker or bear spray?

* Noisemakers are best used to deter a bear that is at a distance – one that sees you and continues to approach or one that's heading to your camp or settlement.

* Before using noisemakers, be sure to assess the situation. Make sure the surroundings are clear of people and the bear has an obvious way out. A bear that's been startled by a noisemaker may not be able to avoid groups of people as it flees the area.

* Remember, the noisemaker may not immediately deter the bear, especially if the bear has had previously experience with noise deterrents. Also, noisemakers may not prevent the bear from returning to the area.

* Bear spray is best used when you need to deter a bear at close range.

Finally, a brochure from the Nunavut Department of Environment states that "Noisemakers are a simple, first level deterrent. However, bears quickly become accustomed to sounds when no other negative effect is present. Have other deterrents or a lethal firearm present and ready in case the noisemakers are ineffective."

I think the bottom line is that there’s no 100% safe and reliable way to deter a bear. Each bear has a different personality, and each encounter is essentially a unique situation. Your best bet is to make sure that you make a lot noise while hiking in bear country, and to practice bear awareness and avoidance techniques. If you do encounter an aggressive bear, and wish to use an air horn, my advice would be to have bear spray as a back-up in case the air horn doesn't work as intended. You can certainly make the argument that its probably best to have both in case one of the products fail for one reason or another.