What Was The Firefall Tradition in Yosemite? 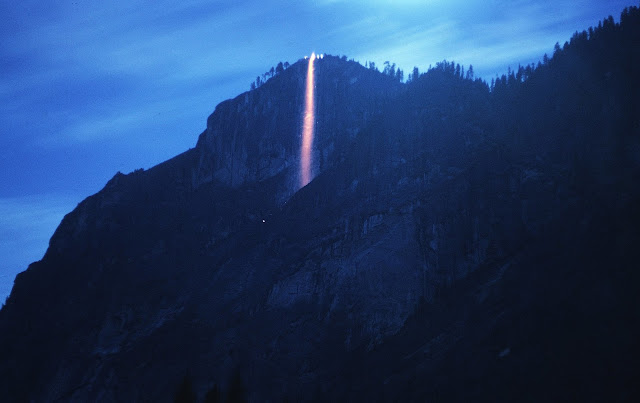 In 1871 James McCauley began construction on the Four Mile Trail, a precipitous footpath that still carries hikers from the Yosemite Valley floor to Glacier Point, while gaining more than 3200 feet along the way. McCauley, who was closely associated with the Mountain House, a hotel built atop Glacier Point in 1873, is most famous for initiating the “firefall” tradition, which lasted almost one hundred years. Although there’s some dispute as to why, when and who originated the firefall, McCauley is generally recognized as being the first person to shove fire over the cliff at Glacier Point, likely in 1871 or 1872. During the first several decades the ritual was conducted on an irregular basis, but by the 1920s it had become a nightly feature during the summer months. According to the June 1934 edition of Yosemite Nature Notes, workers gathered red fir bark from fallen trees during the day, sometimes accumulating as much as a quarter of a cord of wood. Around 7:00 p.m. a bonfire was lit, and then at roughly 9:00 p.m., after the pile had been reduced to a mound of red hot coals, the fire tender would slowly shove the glowing embers over the side of the cliff, thus giving the appearance to everyone in the valley below that a solid stream of fire was falling from the precipice. My new book, Ramble On: A History of Hiking, chronicles some of the other pyro rituals surrounding the "firefall" tradition, as well as the ironic fate of the Mountain House. And yes, the 1970s soft-rock band is named after the ritual. Ramble On is now available on Amazon: https://www.amazon.com/dp/1725036266/