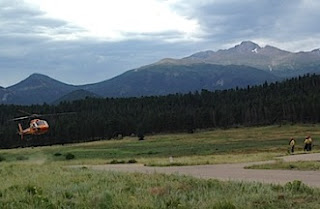 Due to his location and injuries, Rocky Mountain National Park Search and Rescue team members requested assistance from a Colorado National Guard helicopter from Buckley Air Force Base to extricate him via a hoist operation, using a winch operated cable. This occurred at approximately 10 a.m. Rocky Mountain Rescue assisted with the helicopter hoist operations. The man was flown to Upper Beaver Meadows, transferred to a Northern Colorado Med Evac air ambulance and then flown to St. Anthony Hospital.