A bear whose feet were badly burned during the East Canyon fire was rescued Tuesday by Colorado Parks and Wildlife officers and is now being cared for at a CPW facility in Del Norte. The bear is expected to make a full recovery.

“We always hate to see injured animals, but we’re pleased we were able to rescue this bear so we can nurse it back to health and return it to the wild,” said Matt Thorpe, area wildlife manager in Durango.

CPW’s Durango wildlife office received a call from the fire dispatch center late Tuesday afternoon explaining that firefighters saw a bear that appeared to be injured. It walked across a meadow and into reeds next to a pond. The location was on the east side of the Cherry Creek Road which is on the east side of the fire. The fire is burning about 30 miles west of Durango.

Wildlife officers Steve McClung, Andy Brown and Thorpe left as soon as they received the call and arrived on scene at 5:40 p.m. When the officers approached, the bear did not move. 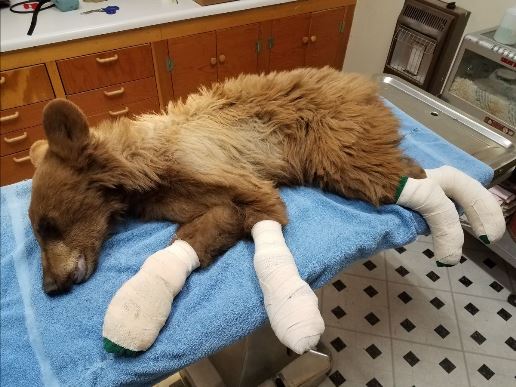 “You could tell it was really hurting,” McClung said.

The bear was sitting in reeds and the officers used poles to push back the vegetation. That allowed them to administer a tranquilizer dart to sedate the bear. The officers examined the bear and found that its feet were burned. The bear was then placed in a trap and transported to the Frisco Creek wildlife rehabilitation facility for evaluation and treatment.

The bear is a male yearling, which means it was born during the winter in 2019 and is now living on its own. Bears usually stay with their mothers for a year. It was moving alone when it was spotted by the firefighters.

“Across the road from where we found it the area was burned heavily,” McClung said. “There were little spot fires and some stumps burning. We can’t say exactly what happened, but it probably got caught and had to move across some hot spots.”

Michael Sirochman, veterinary manager at Frisco Creek, said the bears paws were burned, but not so deeply that the animal was permanently injured.

“The prognosis is good and the underlying tissue is healthy,” Sirochman said. “We cut off the burned tissue that was sloughing off and we put on bandages.”

He said the bear weighed 43 pounds and was quite thin, but that’s not unusual for yearlings at this time of year. He expects that the bear will be ready for release in about eight weeks. The bear is being kept in a cage with concrete floors to assure the wounds will stay clean.

Bears that are taken in for rehabilitation are usually released near the same area where they were found.

This is the second rescue of a burned bear that Durango wildlife officers have been involved with in the past two years. A bear cub, whose feet were burned, was found during the 416 Fire north of Durango in 2018. It was also taken to Frisco Creek where it made a full recovery thanks to the care that it received from CPW veterinary staff. After it went into hibernation the bear was placed in a man-made den with another cub in the mountains west of Durango in January 2019. Game cameras showed that the bears emerged successfully from the den. No other information is known about those bears.