What happened to the old Logan Pass Trail?

I recently finished reading Switchback, a book by William Yenne that chronicles his time working as a packer in Glacier National Park and the surrounding national forests during the 1920s and 30s. In the book he mentioned the Logan Pass Trail a couple of times, which piqued my curiosity as to where the old route tracked, and why it faded from existence.

During the early years of the park the trail played an important role in the Great Northern Railway’s growing system of trails, which allowed tourists to travel between their network of hotels, chalets and tent camps. The Logan Pass Trail became part of a tour known as the “Triangle Trip”, one of four tourist trails, or circle tours, which we will discuss a little more in-depth tomorrow (link here). Though many visitors hiked these trails on foot, most traveled them on horseback prior to World War II. Louis W. Hill, president of the Great Northern Railway, explained to newspaper reporters that the “lodges would be located only far enough apart so that the man on foot even could make the trip and obtain sleeping accommodations,” and that “hotel accommodations of a more prestigious type or tents for the most modest could also be furnished.”

Construction on the Logan Pass Trail began in 1917, and was completed during the summer of 1918. The 16.4-mile trail, named for William Logan, the first superintendent of Glacier National Park, connected the Going-to-the-Sun Chalets with Granite Park Chalets. In all likelihood the construction efforts were bankrolled by the Great Northern Railway, who built most of the trails during the early years of the park in order to connect their network of overnight facilities. Construction of the Granite Park Chalets was completed by the railway in 1915, and was already accessible to tourists via the Swiftcurrent Pass Trail, a route that was originally used by Native Americans. By 1915 the Great Northern had also completed construction of the Going-to-the-Sun Chalet complex at Sun Point. The complex, which remained in operation until 1942, included two large dormitories that could sleep up to 200 people, a large dining room, as well as laundry facilities. Until the Going-to-the-Sun Road was completed in 1933, the only way to reach the chalets was by boat or pack horse. The chalets were closed during World War II, fell into disrepair, and were eventually torn down in 1948. However, during their heyday, they were second only to the Many Glacier Hotel in terms of visitor traffic and as a hub of outdoor activities. To underscore their importance, serious consideration was given at one point for building a hotel on the site on the scale of the Many Glacier Hotel, which would’ve accommodated up to 500 guests. 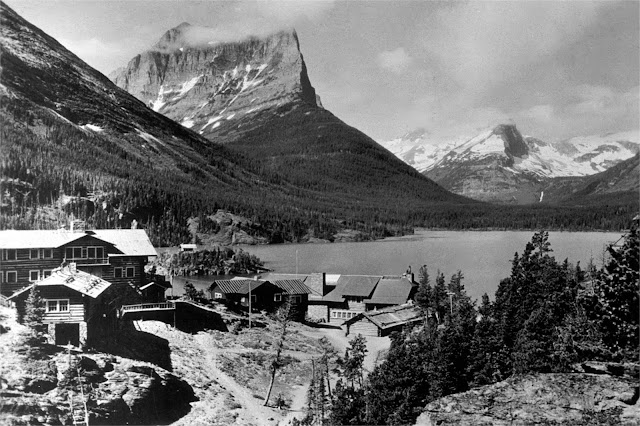 In a letter to the Director of the National Park Service, dated September 24, 1917, a park civil engineer provided an update on new trail construction efforts within the park during the previous summer. Here’s his report with regards to the Logan Pass Trail:


“Logan Pass Trail: This trail, which extends from Granite Park along the west side of the Continental Divide through Logan Pass, thence down Reynolds Creek to a junction with the Plegan Trail, is under construction, about 12 miles of which is practically completed and about 4 miles more will be roughed out so that it can be used for travel. The grading on this trail varies from about 3 ft. in dirt to 6 or 8 ft. in the heavier rock work, quite a good deal of which was encountered. When completed the trail will be about 16 miles long and will be the most scenic trail and the trail of highest average elevation of any in the Park. It will also open to tourist travel the Twin Lakes and Hidden Lake regions which have heretofore been practically inaccessible except to foot tourists that were good climbers.”

A snippet in a pamphlet published by the United States Railroad Administration in 1919 provides a slightly more detailed description of the trail one year after its completion:


“Leaving Going-to-the-Sun Chalets, this trail branches to the left four miles out on the Piegan Pass trail and strikes up Reynolds Creek, past the shelf glacier which sprinkles its waters on a narrow fertile bench called the Hanging Gardens, on the east side of Mt. Reynolds, to a little plateau between Pollock and Oberlin Mountains. The summit of the pass and the approaches to it are literally covered with wild flowers. From the western slope the trail continues along the Garden Wall—a high, thin, saw-tooth ridge—to Granite Park Chalets.“

Below is a section of a park map from 1927 showing the new route (link to entire map). You should note that the red box above St. Mary Lake represents the location of the Going-to-the-Sun Chalets. You may also notice a red line extending up to Logan Pass from the west side of the park – this represents the portion of the Going-to-the-Sun Road that had been completed by that time. It would be another five years before the eastern segment of the road would be completed: 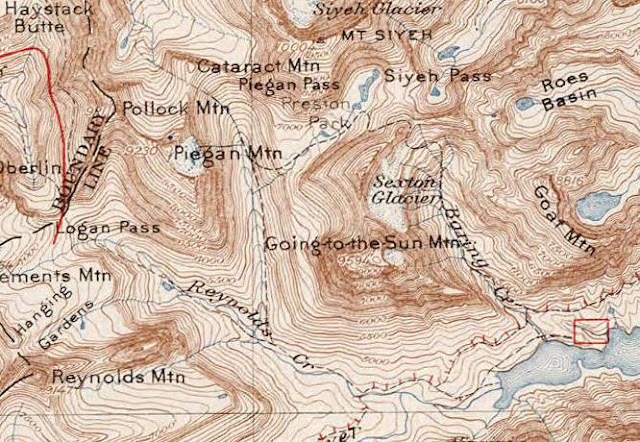 Though this map isn’t as precise as modern maps, the new trail appears to split-off from the Piegan Pass Trail just west of today’s Jackson Glacier Overlook along the Going-to-the-Sun Road, and just east of the confluence of Reynolds Creek and Siyeh Creek. A map from the 1949 park brochure, however, shows a different route. The 1927 map clearly shows the trail ascending towards Logan Pass along Reynolds Creek, south of the present-day Going-to-the-Sun Road. However, the 1949 map shows it tracking north of the road: 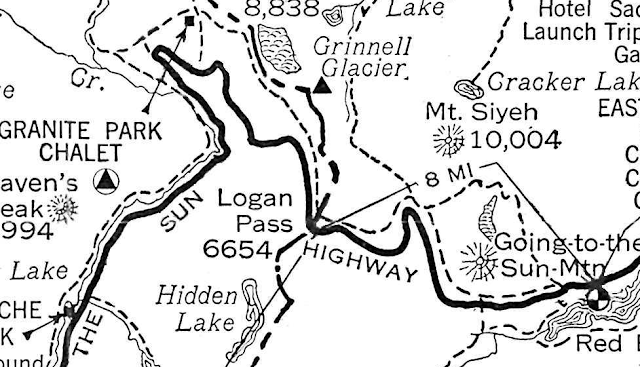 It’s possible that the trail was rerouted between those two dates, but seems highly unlikely. Moreover, William Yenne confirms in his book that the trail tracked above the road when he relayed an incident that took place in 1932 “directly above the east side tunnel of the new road”. The photo below, published by the U.S. Railroad Administration in a pamphlet from 1919, also testifies to the trail passing along the steep slopes of Piegan Mountain, well above the east side tunnel, and the Reynolds Creek valley: 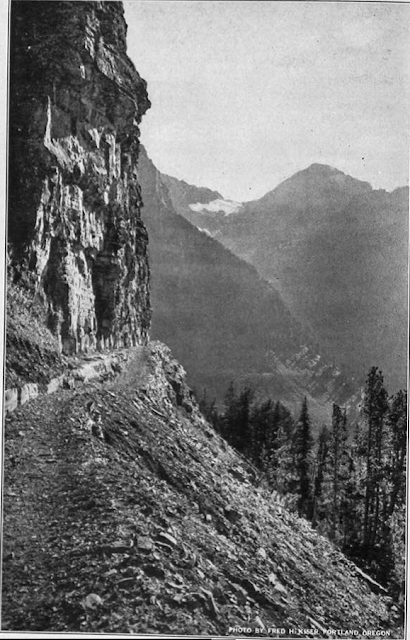 As mentioned throughout the pages of View With A Room, Louis W. Hill was very demanding and meticulous on how his chalets and hotels were to be built and designed. These traits obviously carried over to the trail system as well. In a letter dated July 21, 1923, Hill made these interesting, and rather pointed comments to J. R. Eakin, the Superintendent of Glacier National Park:


“After a few days' trip in Glacier Park, I feel I should write you very frankly my observations and impressions, I cannot help but be greatly interested in the development of the Park as we have a very large investment there - about $1,500,000 - in the hotels, camps, cost of roads, bridges, etc.

The Logan Pass Trail is not as wide nor in as good condition as when originally constructed. Certainly the two or three years’ maintenance, if properly maintained, would make it a better trail than when originally constructed. The only trail crew I saw consisted of three men on the west side of Logan Pass. The east side of Logan Pass needs cleaning out, which would widen the trail and, of course, the loose rocks would be removed. This is a very inexpensive piece of work. I would also suggest that this being a precipitous country for a trail, it would be in the interest of safety to put up a sign and instruct guides that all parties should arrive at Logan Pass summit before 12:00 o'clock noon and not leave before 1:00 PM. This would give an hour's leeway and permit stragglers to come in and prevent parties meeting and passing on the narrow dangerous portions of the trail. It will always be dangerous to pass horses on some parts of this trail. This should be a simple remedy, particularly if it were understood that guides or tourists who do not observe the regulations - should you put them in – might be asked to leave the Park. This precaution, I am sure, would be appreciated by the tourists as they are all fearful of meeting horses in the narrow places.”

The ultimate demise of the Logan Pass Trail came about for several reasons. Chief among them was the completion of the Going-to-the-Sun Road, which allowed visitors to easily drive to Logan Pass, rather than spend a day or more on horseback to reach the higher elevations of the park. Moreover, visitation to the park plummeted during World War II. By 1945 nearly all of the tent camps and chalets had been abandoned, and were ultimately torn down. As result, the National Park Service cancelled the Park Saddle Horse Company concessionaire contract that year due to lack of support. By this time the eastern portion of the trail had become more or less obsolete.

There’s no record online of what eventually became of the Logan Pass Trail. It seems to have simply faded from memory. 1932 was the last year that the park brochure mentioned the Logan Pass Trail by name. The park continued to mention the route through 1939, but the trail was not named. In some cases it was referred to as the Garden Wall Trail, at least the western portion of the trail. The last reference to the “Logan Pass Trail” that I could find was made in a 1945 issue of National Parks Magazine. The last time the trail appeared on a map was in the 1960 park brochure. It appears that the trail was at last gone and forgotten with the onset of the new decade.

Although the eastern portion of the trail has long been abandoned, the western leg continues to live today, and is now known as the Highline Trail. The first segment of the Highline runs 7.6 miles from Logan Pass to Granite Park Chalet. It’s now connected with the “newer” section of the Highline, which was constructed between 1928 and 1929. This leg travels 14 miles from the chalet to Fifty Mountain, an expansive alpine meadow near the junction of the Highline, Flattop Mountain and Waterton Valley trails.