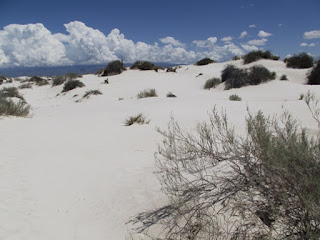 “Our staff are very excited for White Sands to be recognized as a national park and to reintroduce ourselves to the American public,” said White Sands National Park Superintendent Marie Sauter. “We are so appreciative of our partners, local communities, and congressional leaders who made this achievement possible and look forward to continued success working together.”

White Sands National Monument was established on January 18, 1933, by President Herbert Hoover to preserve, “the white sands and additional features of scenic, scientific, and educational interest.” Today’s re-designation recognizes the added significance of the park for its natural and cultural resources. In addition to containing the world’s largest gypsum dunefield, including gypsum hearthmounds found nowhere else on earth, the park is home to the globe’s largest collection of Ice-Age fossilized footprints and tells more than 10,000 years of human presence, all while providing memorable recreational opportunities.

Just so happens that my wife and I visited the park back in April. Here are a few photos from that visit.