During the early afternoon hours of June 30th, a Black Canyon Of The Gunnison National Park visitor was attacked by a doe mule deer in the South Rim Campground. Yesterday's NPS Morning Report stated that a woman was walking two small dogs on a leash when she was knocked to the ground by the deer. The deer then trampled the woman with its hooves, causing life threatening injuries. 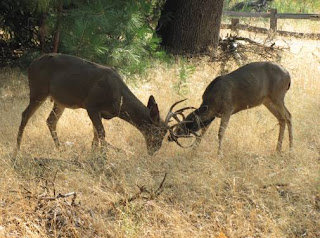 Luckily, a campground host and other visitors heard the woman screaming and were able to chase off the attacking deer. Rangers quickly controlled her profuse bleeding and stabilized her; she was then taken by ambulance to a hospital and went into surgery.

Investigation revealed this deer was likely protecting its newborn fawn from visitors with dogs. Multiple minor incidents involving visitors with dogs preceded the attack on the woman and her dog in the campground.

Colorado Parks and Wildlife officers subsequently shot the deer after it charged two CPW officers who had a leashed dog with them. The woman is expected to make a full recovery.