On the night of July 19th, at 7:30 p.m. park rangers were notified via cell phone that a 13-year-old female from Estes Park had suffered a leg injury roughly a half mile northwest of The Pool in rugged Forest Canyon in Rocky Mountain National Park. Her father had climbed to higher ground and was fortunate to get cell phone coverage. 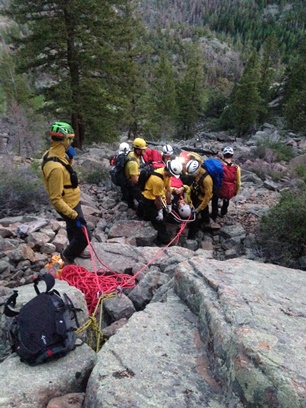 Rocky Mountain National Park Search and Rescue Team members reached her and her father between 1:30 to 2:00 a.m. on Monday morning. It was difficult to find the patient in steep, rugged, off trail terrain. The general area had also been impacted by the Fern Lake Fire, which posed additional challenges for rescuers to traverse through this area after dark.

A technical raise was used to bring the patient roughly 150 to 200 feet up and over a rock cliff to a flat bench area where a landing zone had been constructed. The patient was flown from the area to the Upper Beaver Meadows helispot at 4:30 p.m. yesterday, and then taken by ambulance to the Estes Park Medical Center.

Park search and rescue team members were assisted by the Northern Colorado Interagency Helitack Crew. This helicopter crew assisted with reconnaissance and extraction of the patient from the area. Over 30 park personnel were involved in this incident as well as one member of the Alpine Rescue Group.

Because the patient is a juvenile her name and her father's name will not be released.

As park rescue personnel were finishing the Forest Canyon rescue they were notified at 5:15 p.m. yesterday by cell phone of a 43-year-old woman, hometown unknown, with a leg injury near Emerald Lake. Search and rescue personnel reached her at 7:45 p.m. A team carried her out on a wheeled litter. They were expected to reach the Bear Lake Trailhead by 10:00 p.m. last night. She was expected to be taken by ambulance to Estes Park Medical Center. Twenty park personnel are involved in this incident.